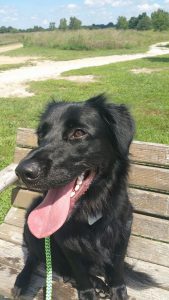 Gibbs is a rescued border collie/ golden retriever mix that began his dog training with Discover Pet Training when he was just under 2 years old. He was incredibly shy and scared of everything, and we mean everything. Because Gibbs was so terrified he would try to keep the scary things away the only way he knew how to, by acting out aggressively. Basically saying stay away or I will get you as a way to protect himself.

We got to work and started his training with the clicker and rewarding him when he just relaxed a little. As he began to settle in we added some obedience and trick training to build his confidence up. We also worked with him and his owner to change his mind of the world around him. Over many sessions we taught him that instead of thinking “something scary is going to happen” when he saw a new person or dog or a car or heard a noise that these new items in his environment brought good rewards and were not that scary after all. Gibbs slowly began to feel comfortable in his environment. He was able to go on hikes and even go camping with his owner without freaking out at noises, people, or animals.

Here is what Jaime, Gibbs’ owner had to say about his dog training with us, “I just wanted to give you some Gibbs happy news! We’ve had a lot of repair people in and out of our house the past months and I’m very happy to say, while he is still timid, he has been able to meet and greet strangers without any signs of aggression. He’s also able to go into stores with me. I worked on a “focus” command so he stays right by me and very very rarely reacts to strangers and with a little reassuring he’ll allow petting

the biggest thing I can honestly say he has accomplished is the vet’s office. He went in for his annual check up and I was fully prepared to muzzle him because of his reaction last time and the staff cleared the front of the clinic as a precaution. However the little stinker went in a little nervous, but little tail wags and a huge smile! He was able to meet and greet all of the staff as well as sit without restraint for his shots and check up! He still has his moments but I’d say he’s 90% better than when you first met him! Thank you again for all your help!!!”